Apologies to whomever reads this blog on occasion, for the terrible gaps in communication the blog experiences. Anyone who has ever left me a voicemail is familiar with the feeling. Again as we near the monthly deadline for the magazine, my creativity tends to be otherwise directed.

I'd say in every life, there are certain lengths of time or situations that seem like the technicolor parts of The Wizard of Oz, in that they stand out for being beyond the ordinary and kind of wistfully lovely. I was just looking at my water bottle (in effort to avoid looking at the photos in need of captions beside said bottle of Aqua Panna - which I of course buy because the packaging is so pretty.) This particular brand of water is apparently bottled at the source in Italy, which made me think of the trip I took there with some other GPS folk over spring break my senior year of high school. There are other things that remind me of that trip too, like gelatto, and John Mayer's album "Room for Squares" (there were a lot of long busrides. Ben Folds "Whatever and ever, amen" also reminds me of the trip - sorry Margaret, I still have your cd...) It was like a nine-day whirlwind tour of one of the most chock-full-of-stuff-to-see countries in the world, so I feel like everything was pretty jumbled, and it wasn't until afterward that I realized how cool it was.

Our travels began in Rome, and from there went to Florence, Venice, and Milan, with smaller and lesser known towns in between each. The first day, in addition to wanting to just lay down in some ancient, cobbled street and sleep due to jet lag, I remember being so thrown off by the fact that people in this great city go to work everyday, and they could look out their car windows or their offices and be like "oh, that's where Caesar was stabbed. Yeah, and that's the jail Paul was kept in." So much history, right there, smack in the center of a big, modern city, totally incredible. Particularly, I suppose, to an American, since most of the historical things in our cities don't date much further back than Paul Revere.

The last night we were in Rome, we went to a discotheque, which I'm sure Mrs. Pierce, the principal of the upper school and our chaperone, really enjoyed. It was somewhat intimidating to be in a crowded room, with Dido thumping through the strobe lights, surrounded by big guys with lots of necklaces speaking another language. (Especially if you hate Dido.) A guy in a black tanktop and a gold chain asked me to dance (or inferred the invitation by standing extremely close to me) and I mumbled something about my boyfriend and darted away.

Eventually I spotted the most J.Crew-looking guy in the room, wearing a button-up shirt and a pullover sweater, and I made my way towards him. Eager to practice his English, he asked me to dance (using words, a good sign.) As we danced (probably awkwardly, I have never claimed to be a good dancer, although it was a slow song) he asked me all the questions we learn in Spainish class, but he had of course learned them in English. "What sport do you like to play?" (I told him I ran, which he seemed pleased about. One question successfully asked and answered.) "Do you like basketball?" (I told him it was ok. He was more of a fan than I.) "Do you like Allen Iverson? My favorite player." (Interesting choice. I believe I mentioned Michael Jordan - again, not a big basketball fan.) "You like music?" (I did, as did he - kind of...) "You like Bob Marley?" (Seriously? Um, I guess. I like John Mayer. This was a point of confusion as we had exited his realm of English related topics.) This went on for a couple of songs, then it was time to extricate the bolder girls from a throng of Italian men and head back to the hotel.

Florence and Venice, unfortunately, are kind of a blur, although I took detailed and copious notes in my travel journal (as per my Grandmother's instructions) so it's all retrieveable. Those pigeons in the piazza are gross, and one of the reasons I hate birds. Our tour guide wore Dolce & Gabana 'Blue', and anytime I get a whiff of it now I think of her, tirelessly leading our group of chattering American high school girls through the streets of these beautiful old cities in the wake of her perfume, singing the Dixie Chicks' "Travelling Soldier" over and over and over again. What a patient lady.

The Doge's Palace was so beautiful, and I always think of it in reading the bit in The Pursuit of Love about how Fabrice's grandmother once rode past a small villa in a gondola, and stopped to look inside because it was so lovely. Once inside, she looked around at the pale blue platster walls and said "If there is a box with a key on a velvet ribbon in that drawer, then I own this house." There was. Some forgotten love of hers had given her the house long before. (Sidenote, I love Nancy Mitford. I am reading a book of the letters of the Mitford sisters right now, and it's so completely fascinating.) 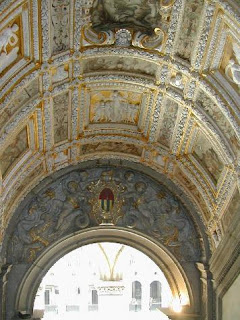 By the time we got to Milan, our last stop, we were all exhausted from the rushed seeing and doing. Our first night there, an homesick and melancholy Margaret was drooping around the room. Mary Howard and I were unsure of how to cheer her up, and turned on the television, thinking perhaps Italian "Who Wants to be a Millionaire" would be on, or something equally amusing. Instead, the screen opened to a channel which was playing Lord of the Rings - in English. Margaret, at the time, was a huge fan, and we were all shocked (we hadn't seen television in English the whole time we'd been there) and immensely pleased, as Margaret was cheered immediately by Liv Tyler's glowing skin and pointy ears.

The next day, we went to visit a huge cathedral (these are copious in Italy, to say the least.) The inside I don't really remember, but I'm sure it was grand, etc. Our guide told us that if we wanted, we could go up the circular staircase in a turret to the roof. Well, sure. Upon exiting that staircase, Margaret was further cheered, because it was apparent that we were in Rivendell (I realize I just outed myself as a huge nerd...oh well. Probably not much of a shock.) Intricately carved stone covered every inch of the roof. There we stood, high above the city of Milan, surrounded by the work of stone masons hundreds of years ago. These were people who began carving their fleur-de-lis and curving arches with the full knowledge that they would never live to see the final product. And they dedicated their lives to this carving - on the roof. Not at the altar, or around the door, where everyone would see it, but on the roof, for God to look at and enjoy.

In addition to the beautiful carvings, photos of which hang in my living room to this day, Mary Howard and I noticed a man, who was one of the several people scattered across the top of the building. He was different than everyone else there as he was clearly not part of a tourist group. He was a handsome guy, Italian in features, probably about thirty. He was wearing a navy suit, a blue shirt, and a red and blue tie, and had a little shopping bag in his hand, and he was smiling contentedly to himself. Here was a guy, we presumed, maybe on his lunch break, who left the office, and came to the top of a cathedral to walk around by himself and enjoy the grandeur of the carvings and the view. It seemed like something in a book. Of course, we loved him and took several pictures. Little did he know that several American girls were not-so-subtly stalking him that day and still have his charming image in a photo album.

Anyhow, now that I've rambled for a while, those are a few of my techinicolor images from the past. Just thought I'd regale you with some tales, given my absence as of late, and considering how long this probably is, I'm sure I've made up for it.
Posted by Emily Lilley at 11:17 AM