Lunch break, or, how I almost got hit by a city bus

Some days you just want a smoothie. Particularly, the Cherry Picker, from that denizen of smoothie greatness, Smoothie King. Today was one of those days, so I headed down to the S.K. on Market Street, next to the SportsBarn. I drove down Broad, hoping to find a parking place, then turned on Third Street, where after driving one block I prepared to turn right onto Market. The light was green, the sky was blue, a couple guys in suits crossed the street a little quicker so I could turn, and then I saw her.

Barreling down the steep opposite hill of Third Street was a huge city bus driven by a [proportionally speaking] equally huge woman with a 'don't even think about it' look on her face. I was almost mid-turn - turning right, mind you, on green - but stopped because I could tell that although she was surely trained in some sort of professional bus-driving traffic school, this woman clearly had little regard for the rules of traffic. She was well on her way to cutting me off in her giant bus and turning - LEFT - in front of me (see Figure A.) Fortunately, the two guys in the suits had hurried across the street for me, because otherwise they'd be toast right now. Fortunately also, I was paying attention, and stopped mid-turn, otherwise both myself and the guys in the suits would be toast right now. 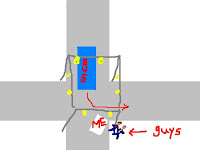 Disregarding self and guys in suits, what if the light had changed as she barrelled down the hill? She would have plowed on through, possibly causing a large and fatal traffic accident. What on Earth was she doing in such a hurry? There are plenty of other buses for Chattanoogans to ride, and everyone who's ever ridden a Tiger Transit knows buses are never on time, so it's not like she was trying to meet a schedule. She was either a) just stupid, or b) both stupid and, as Christina says in You've got Mail, "like one of those people who brag because they're tall," hurtling her giant bus through traffic because she was bigger and therefore could.

Unfortunately, I didn't have a chance to note her bus number as she was flying by me like a speeding locomotive, but I am currently googling the number to call about these busses in attempt to report her. Get this maniac off the streets and give some down-on-their-luck, recently laid-off person the job.

In other news, have recent (read: 2008-2009) economic events have left your head spinning, wondering "what on Earth is a credit default swap?" or "will I personally be negatively effected by the London Interbank Offered Rate, or LIBOR?"

If these questions sound familiar to you, Ali, our resident political expert - and resident of what might become the 51st state (nope, not Puerto Rico or the Virgin Islands, think the other random contestant in Miss America) - has something to share. CNNMoney has conveniently created a glossary of tricky terms to help everyday Americans understand what the h. is going on. I have found it very useful mere hours after it was passed on to me, in reading the Vanity Fair article about the collapse of Iceland's economy, which I will now quote from to close:

If only all economic crises could be explained in such plain (and humorous) terms.
Posted by Emily Lilley at 9:51 AM

I bought the deluxe 10-year anniversary edition of YGM in DC. Before this weekend, it had been at least a year since I'd last seen one of my favorite movies. And yes, big ladies driving big buses are like people who brag because they have rent-controlled apartments in NYC or because they're tall.

George, who thinks that the people in the children's department at Fox Books should have Ph.D.'s in children's literature would think that all this credit-default swap/toxic asset/bailout discussion makes America like a "tomb." He would go to the nut shop where it's fun.

Ah, Scotty. This is why we are friends.

Sort of makes you wish there were traffic cameras there. Oh, that's right you are against those.