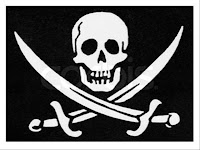 *Let me begin with the caveat that, for the sake of finding it amusing, I am operating under the assumption that no one has been hurt in the situation I am about to discuss. If so, they haven't said it on npr, and they usually don't shy away from grim details.

This is the year 2008. There are men orbiting the earth in sophisticated space craft. People carry telephones the size of an index card that play music and use the internet to find them restaurants when they're stumped on dinner. A black man has been elected president of the United States. Warren Sapp, former NFL defensive tackle, is in the running to win Dancing with the Stars, and Kmart sells cashmere sweaters. The point being, this world has come a long way since, oh I don't know, the 1600's. And then, this morning, I wake up and while showering hear this on the news. Somali pirates have captured a Saudi Arabian oil tanker and are holding it for ransom.

As in "arrrghh, matey," "someone catch that crocodile!" "those *ing amateurs. you left your dog, you idiots!" and "I can’t bring this ship into Tortuga all by me onesies, savvy?" I actually heard someone on the radio say that the pirates had presumably attached ropes to the side of the vessel and swung aboard. "This is dangerous work but isn't particularly hard work for the pirates," reads the npr article regarding the situation.

Now, apparently the reason that people in Somalia have resorted to pirating has its roots in the fact that their government has been in turmoil for the last 25 or so years, and the economy there is completely unstable. That is very unfortunate, and I would love it if our foreign policy had more to do with helping people in countries like Somalia establish an infrastructure than certain other ventures.

That said, pirating apparently also has other draws. According to npr, once again, pirates say 'A woman won't even look at me unless I'm a pirate making a lot of money.' That's right, they're in it for the ladies. Johnny Depp's appeal has apparently spread beyond Claire to the entire rest of the world, including eastern Africa.

The New York Times actually conducted an interview with some of these pirates in September, and they offered further reasoning for their actions, presumably in addition to impressing their lady friends. “We don’t consider ourselves sea bandits...We consider sea bandits those who illegally fish in our seas and dump waste in our seas and carry weapons in our seas. We are simply patrolling our seas. Think of us like a coast guard.” So their pirating has an environmental and humanitarian aspect as well.

The news reports even offer the fact that the pirates are often unarmed...perhaps they use the traditional "or you'll walk the plank!" threat to keep the hostages compliant. Apparently the boats are mainly captured by the element of surprise.

Although, I suppose, hijacking a boat that doesn't belong to you and holding its sailors hostage is not the right thing to do, in a way I appreciate these fellas. In these days of doomsday economic news, and things falling down around our ears, it is nice to wake up and hear on the news that pirates are capturing frigates on the high seas, like it's 1700. Just hearing Robert Segal say "pirates" adds a whimsical note to the day, let's be honest.

Long live Captain Jack.
Posted by Emily Lilley at 10:43 AM