Let me tell you a story

This story is not about something that happened to me, although it did happen to my friend Ali, who some say is freakishly like me in many ways, so it is almost the same thing. I share this story with you because Ali does not keep a blog, and can only tell it via word of mouth, so I volunteered to present it here.

*A little back-story: Ali (is a genius and works for CNN and) lives in Washington, DC. She recently moved into a new apartment in the basement of a home, which is occupied by a family with two young daughters. Ali has mentioned these children to me in passing, and that she was enjoying being in close proximity to a family while not feeling obligated to continually interact with them. The other day, on gchat of course, she noted that she had "just taken some kids to the zoo," but for some reason this was left unexplained. Last night at my apartment (she is in town, yay!), I asked her about it, assuming that the kids she had taken to the zoo were those of the family she lives beneath. She reacted with surprise that she had neglected to tell me the whole story, and then shared the following tale, which I found amusing. 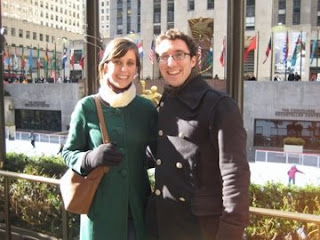 Many days, Ali's work schedule is such that she meets her (also genius) boyfriend Kevin for lunch at some charming restaurant in one of DC's equally charming neighborhoods. The neighborhood where Ali lives happens to be the one where the National Zoo is. As she and Kevin stepped out of their lunch spot one day, two very clean and well-kempt young children approached them - a boy of about 10 and a girl of about seven. "Excuse me, ma'am," said the boy, "can you tell us where the Zoo is?"

Ali and Kevin looked around for adults belonging to the children, and realized there were none. Perhaps this was a "Mixed-up Files of Mrs. Basil E. Frankweiller" kind-of thing, and these children had run away to spend some time at the Zoo - did their parents know where they were? "Yes." Maybe they were time travelers from back in the day, when parents felt completely comfortable sending their young children unaccompanied on the Metro into one of the largest, busiest cities in the country, with the instruction that they get off at the stop that said "Zoo" and ask someone how to get there.

Turns out, they were not time travelers, but apparently the quite cosmopolitan children of parents who are very optimistic about today's society, and they were looking for the Zoo. Ali felt apprehensive about sending them off into the city alone (an emotion their parents had, again, avoided), and so bid Kevin farewell and took off to walk the several blocks with the kids.

As they walked, she asked them whether they weren't meant to be in school. "No," they said, "it's Election Day, so we have the day off." They went on to tell her that they normally attended a Jewish private school in Maryland, and had decided to take in the Zoo while they had some spare time. "We had a fake election at school yesterday," they proceeded to tell her as they made their way down the street. "It was totally pointless though [*here I would like to note that I'm quoting them] because, come on, we're all Jews, and everybody knows that all Jews are Democrats, and we're all just going to vote the way our parents do anyway. So, Obama won in a landslide." Ali, surprised by both their political and cultural acumen, as well as their frankness, responded "What about Joe Lieberman?" "Ohh, he's no Democrat," the children responded disdainfully.

They continued on their way to the Zoo, chattering happily about their dog and their favorite cousin, of whom Ali reminded them. Ali also reminded them to look both ways and stick together as they crossed the street and reached their destination. They stood in front of the gates. Ali surveyed the sky above them, and said, "you know guys, I think it might rain, I have an umbrella I could give-" "No," they said pleasantly, "we don't mind. No big deal. Thanks for walking with us." "Um, sure, no problem, have a good time," Ali said, and watched them walk cheerfully into the National Zoo together.

As she walked home, Ali realized that in their approximately 20-minute walk, she had never gotten their names. "It was weird, we had just had this long conversation, I knew all about them and their school and pets, then they just left. I felt like I should have shaken their hands or gotten their cell phone numbers or something, but they were kids, so of course I hadn't. Very surreal."

And that is the story of how Ali took some kids to the Zoo.
Posted by Emily Lilley at 3:21 PM

Write a short story based on Ali's day and you too could win a Newbery Medal.

haha, if that happens, I will be sure to note in my acceptance speech that you called it.