Chris Thile, you know you want to talk to me 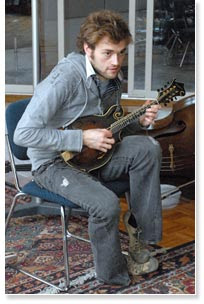 This is just a brief post in effort to get my courage up to call his fancy publicist in New York ("New York City!!" to quote the old salsa commercials.) You see, Chris and his [relatively] new band the Punch Brothers are coming to Chattanooga on March 30. Given the fact that Chattanooga is (as previously mentioned in conversation with Ali) practically synonymous with the mandolin (as practically as a city can be synonymous with a stringed instrument), I think that an article about Chris and the band would be perfect as a "culture" piece for the magazine for March (right? plus, I really want to meet him.) They will be in Birmingham on January 31, so my plan is that I could go down there and do the interview, Jason could take some pictures and bond with Chris and the band re: musical instruments, then we are best friends with them and hang out all the time. Perfecto. But first I have to call the scary publicist and see if she'll grant me an audience with the wizard.
Posted by Emily Lilley at 12:34 PM

you should come to birmingham and stay with me!!

Oh don't worry, if my plan works, I will be making a reservation at the Fain house!