Friday the 13th, or, Valentine Eve! 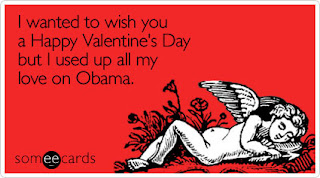 Ah, Valentines day. For a pretty insignificant holiday, this one is awfully controversial. I try to be like Kirsten from the OC, who loves Valentines day and all it connotes, and that is pretty easy when you're dating someone (or married, I suppose I should throw that in there since like half of ya'll are by now.) The pretty pink tulips currently sitting on my desk are a testament to this fact. (My valentine is a good one.)

On the first floor of the newspaper building, BiLo has set up a "Valentine Shop" for people who work here (read: men) who forgot it was Valentines weekend and haven't gotten their significant others a gift. In addition to ridiculous balloons and stuffed animals (really? I'm an adult. I have no interest in a stuffed animal. What on earth is up with that? Like people need more useless crap to sit around in their houses? Rant over), there are a couple tables full of bouquets of flowers (now, talk about a great gift for a girl. Take my word for it, guys. Flowers are always appreciated.)

Seeing this took me back to high school. For those of you who don't know (weird...), I went to an all-girls high school. For the first few years I was there, Valentines day was pretty much crazy. The commons area, which is a huge open space, big enough for like 400 people to stand around, would fill with folding tables. These tables were there for the sole purpose of accommodating the literal thousands of bouquets that arrived at the school at a rate something akin to rainfall during a monsoon all day long. By lunchtime, the room would be covered in blossoms of every type and color, enormous bouquets of long stem roses, cute little nosegays of yellow daisies, fluffy poofs of peonies. Row after row of folding tables crowded with vases of every shape and size - it was like a florist's Valhalla.

The thing was, out of these thousands of bouquets, how sad if not a single one was for you? My nice mom always sent me something, so I wasn't one of these unfortunate few, but at a girls school, you can imagine the sting. So eventually the school banned floral deliveries on Valentines Day. While it makes sense in the emotional, non-competitive scheme of things, I was always kind of sad not to see the commons filled with flowers once a year. The carnations the Honor Council sold quickly filled the role of making people feel bad for not being in a relationship or having thoughtful parents, as they would stick them to your locker, and it was even more clear who got flowers and who didn't. Ah, girls.

I conclude with a flashback from the old-school (read: sophomore year) days of Livejournal. Hopefully, it will make everyone chuckle. My, how some things have changed...

"Everyone has begun receiving their pink and red gifts. Ben [finally] gave Krisan pink and red daisies, tap made walker some pink and red cookies, and Krisha has a couple of pink and red cards sitting on the ol’ desk. I’m sure that tonight’s slew of dinner dates for the roomies will fill our room with even more lovely flora. I have had one request to be someone’s valentine today, and it was immediately followed by a demand for cookies, which definitely weakens the validity of the first request. Never fear, however, my mom sent me a package…

Claire, with whom I would most likely ordinarily be spending my valentines evening, as I do every evening, pretty much has the flu and has been asleep all day, except when she went to the doctor. I am not sure what to do in this situation, but suspect that it will involve me studying for Wednesday’s geology test and going to sleep early tonight.

I see some positives in not having a valentine, however.
1) I do not have the responsibility of buying/creating an incredibly imaginative and thoughtful v-day gift for a significant other
2) One of the football players in geology lab today informed us that his “girl” had her baby this morning. (Note: he was in geology lab this afternoon.) This will also not be a problem for me.
3) less chocolate given to me = less chocolate consumed, and conversely, less chocolate consumed = me still fitting normally into my formal dress this weekend, and that is always good.

I suspect my English teacher of trying to be clever by making us read Wordsworth for homework last night. Coincidence that we start the unit on romantic poetry on valentines day? I think not. I have previously mentioned my dislike for poetry of pretty much any sort. E.e. cummings is the only one worth anything. But romantic poetry is the worst. Ick. And I used to think Dr. Himmelwright was pretty normal…

Claire saw someone [male] walking around campus wearing very large slippers that were modeled after bananas [the fruit, yes.] This is made better by the fact that we think it is someone we know, and therefore might have the opportunity of ridiculing later.

*more evidence that cupid is employed by the Devil himself; blatant violence, he is a felon. Watch out for him."
Posted by Emily Lilley at 9:18 AM

ahhh the livejournal!! love it!

can't wait to play in chattanooga next weekend!!