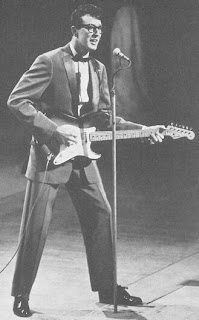 So this morning on the way to work, I heard on Morning Edition that today was the fiftieth anniversary of Buddy Holly's death. You know, he sang "Peggy Sue" and "That'll Be the Day" and "Every day" ("...it's a-getting closer, goin' faster than a roller coaster, love like yours will-a surely come m-y-y way, a-hey, a-hey hey...")You always hear about Buddy Holly, especially if you're a big Weezer fan, and perhaps you have wondered, like myself, why he is so well-remembered, all these many years later. After all, my research tells me that he only released one album while he was alive, but after his death his label could barely keep up with the demand for posthumous recordings. So, here's my brief explanation of Buddy Holly. If you know more about him than me, feel free to add.

He was only 22 years old on what Don McLean immortalized as "the day the music died" in February 1959. He had a wife he'd only been married to for like, six months. Charles Hardin Holley had grown up listening to, and playing, bluegrass in Lubbock, Texas. He was also heavily influenced by another great, Elvis Presley. Now, if you've read "The Little Book," (Ali, this means you, because I know no one else has)you know that a lot of people had never heard the kind of 'rock-a-billy' style music Buddy Holly came up with, and if you think about the music that preceded the fifties (I'm thinking "Swing, Swing, Swing," or pretty much anything people were doing the pretzel to in the 40's), something like "That'll be the Day" would sound pretty fresh.

People loved it. Bob Dylan considered making eye contact with Holly at a 1959 concert such a formative experience that he talked about it in a Grammy acceptance speech almost 40 years later. The Beatles supposedly chose their insect-ish band name with Buddy Holly and The Crickets in mind, after being significantly influenced by Holly's music - as were the Rolling Stones. Particularly, apparently, the rhythm structure. He also had a unique style of singing, involving a "hiccup" stop that he used to emphasize words (please see the quote from "Every day" above for brilliant phonetic examples.)

That is a very brief synopsis of a very important musician, but I have lots of other things I am supposed to be writing. For those of you who are curious, or for those of you who were in me and Amanda Youell's art class in eighth grade and still remember all the lyrics thanks to us, I close with a link to an article attempting to decipher "American Pie."

A long, long time ago...
I can still remember
How that music used to make me smile.
And I knew if I had my chance
That I could make those people dance
And, maybe, they'd be happy for a while.

But february made me shiver
With every paper I'd deliver.
Bad news on the doorstep;
I couldn't take one more step.

I can't remember if I cried
When I read about his widowed bride,
But something touched me deep inside
The day the music died.

What?!? I didn't know that he sang "Every day" first! I only know the James Taylor version. Thanks for the enlightenment!