Sorry, Erin, the Morning Post has shifted to afternoon publication due to business in the morning this Friday :)

Let's see, what's in the news for the Friday Afternoon Post this week? Lent has begun, and given my recent Anglicanism, I decided I should probably give something up. So, ladies and gentlemen, I will not be purchasing any clothing between now and Easter. For some of you, this may not seem like a big deal, but the two emails I received today from J.Crew and my March Vogue are both indicators that this might be a tricky lenten season, which I guess is kind of the point. 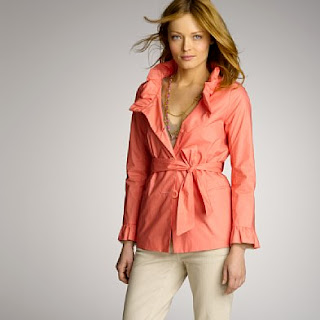 I also cut my hair this week, having not done so since like, August. It was crazy long, and making me crazy. So after reading an article in said Vogue about the new haircut, I decided it was time. Turns out, I wanted exactly eight inches removed, so in addition to a new look, I inadvertantly got a new title - philanthropist, because the haircut lady (Kim, p.s., if you ever need your hair cut or colored, she's pretty awesome - I'll give you her number) is sending it to Locks of Love, for little kids who are sick and need wigs! Don't worry, it's not as short as that makes it seem (if you were concerned about my now needing a wig or something.) So far I am thoroughly enjoying the new shortness.

It is now similar to Miss Moss' hair here, except I wear pants or a skirt whenever I have tights on.

Due to recent bursts of spring-like weather, and the emergence of daffodils (which, sadly, will meet an untimely end this weekend as the forecast calls for SNOW, SO lame), I am totally over winter and ready for the full conversion to Spring, the happiest of seasons. Although it is sad that Isaac Mizrahi has left Target, he has now moved to Liz Claiborne New York, and his spring collection makes me very happy.

Spring means that baseball is back, and this means the Lookouts!! Only 46 days til the opening game, on April 14, with the new roster, new coaches, and new Dodgers blue uniforms at BellSouth Park! I'm very excited. I am also looking forward to the Nightfall summer concert series in Miller park, but that won't start until the end of May, so I can't think about it yet.

So many wonderful things about my city, but so many more once the weather gets pretty! Come see for yourself! I'd be happy to show you around, and take you to some of the fabulous eateries around town.