I recognize that it is not fair for me to get frustrated that people don't constantly write in their blogs to keep me entertained when I myself only write like twice a week. (I appreciate Erin and Lindsay who typically do a very steady job of supplying me with something to read!!)

So I am therefore publishing the Friday Afternoon Post even though as I type this I can't think of any real news to report (I'm sure whoever might be reading this is now gearing up for a fun time...)

I choose instead to utilize my training and background as an historian (look Dr. Sayel, I'm using my degree!) to provide you people with some THIS DAY IN HISTORY facts, with accompanying commentary supplied by the editor (self.)

ON APRIL 3rd...
1) 1829 - James Carrington patented the coffee mill. Many third world countries in South America, as well as the entire city of Seattle, have this guy to thank for the world-wide caffeine addiction he enabled. Thanks, James, for expediting the best part of waking up!

2) 1865 - Union forces occupy Confederate capital of Richmond, Virginia. Contrary to popular belief, the Confederate States of America did in fact come to an end.

3) 1882 - The American outlaw Jesse James was shot in the back and killed by Robert Ford for a $5,000 reward. There was later controversy over whether it was actually Jesse James that had been killed. Soon after, Robert became the wild west's first spokesman for regularly updating your glasses prescription. 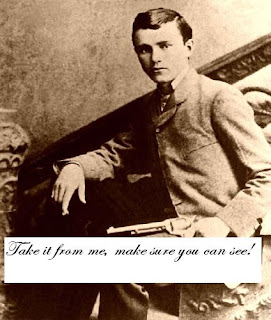 4) 1933 - First Lady Eleanor Roosevelt informed newspaper reporters that beer would be served at the White House. Thanks, Mrs. Roosevelt, for clearing the path for our president to give the Queen of England an ipod and the Prime Minister a dvd box-set. The White House, keepin' it classy since 1933.

5) 1948 - Harry Truman signed the Marshall Plan to revive war-torn Europe. The plan entailed the gifting of $5 billion in aid for 16 countries. Thanks, Pres. Truman for an historical event that I most likely will never be able to stop confusing with the Monroe Doctrine (they are not even remotely the same thing.)

6) 1968 - Martin Luther King Jr. delivered his "mountaintop" speech just 24 hours before he was assassinated. In all seriousness, just plain thanks to Dr. King.

7) 1972 - Charlie Chaplin returned to the U.S. after a twenty-year absence. He was clearly waiting for a decade when ridiculous facial hair was a norm rather than a unique attribute. You make me laugh. I think my favorites are 4, 5, and 7. Thanks for the history lesson.

Also, who knew that you were supposed to put "an" in front of historian and other forms of the word? So... thanks for the english lesson, too. (I guess now that I'm saying that in my head, "a historian" sounds horribly wrong... still, I feel like I learned so much today!)