This day in history is back again - mainly because I'm busy today!

1492 - Christopher Columbus signed a contract with Spain to find a passage to Asia and the Indies. He sailed, as you might recall, with three ships (say it with me- Nina, Pinta, Santa Maria) and discovered something else, but figured Ferdinand and Isabella wouldn't know the difference. And there you have it - America! 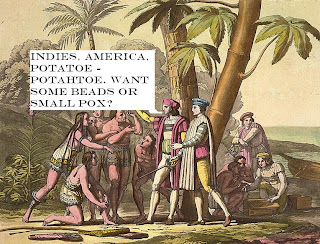 1521 - Martin Luther was excommunicated from the Roman Catholic Church. A direct result of a) being struck by lightening and b) nailing a list of 95 problems - of which his 'kicks' weren't one, to the church door at Wittenburg. 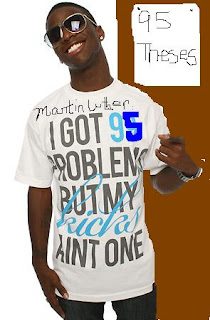 1704 - John Campbell published what would eventually become the first successful American newspaper. It was known as the Boston "News-Letter." Campbell was recently overheard muttering "I should have invented soup before my cousin" after news that many major dailies like the New York Times were on the verge of collapse.

1810 - Pineapple cheese was patented by Lewis M. Norton. Only one word for this one - SCORE.

1917 - A bill in Congress to establish Daylight Saving Time was defeated. It was passed a couple of months later. One more piece of evidence that even if Congress manages to make a good decision, they'll find a way to screw things up later. 1961 - About 1,500 CIA-trained Cuban exiles launched the disastrous Bay of Pigs invasion of Cuba in a failed attempt to overthrow the government of Fidel Castro. As this was an unmitigated disaster, Castro and his familia continue to rule over Cuba despite the fact that most of the people who live there would leave if their fishing boats could make it to Miami.

1967 - The U.S. Supreme Court barred Muhammad Ali's request to be blocked from induction into the U.S. Army. Really Muhammad Ali? You thought they'd let the best fighter in the country skip the war?

1970 - Johnny Cash performed at the White House at the invitation of President Richard M. Nixon. He played "A Boy Named Sue." Everyone at the event wondered why the president looked so uncomfortable when Cash sang the lines " Well, I grew up quick and I grew up mean, My fist got hard and my wits got keen, I'd roam from town to town to hide my shame."

2001 - Barry Bonds of the San Francisco Giants hit his 500th career home run, becoming the 17th major leaguer to reach the mark. Now he holds the all-time major league record with 762 home runs. I mean, steroids or not, I'm pretty sure I couldn't hit that many home runs.