Since we had Mr. Henry for eighth grade English, and he got sick of trying to teach us to diagram sentences when we were clearly bad at it (and instead would make us bang our hands together and bark like seals because he thought our lack of grammatical knowledge made us ridiculous), I never learned what a split infinitive was.

Ok, it's possible that he did teach us that and I wasn't paying attention, or that I heard Ms. Exum talking about it in the hallway or something. However, I wonder about it every time I watch the Gilmore Girls episode where Paris is yelling at Bill in the Daily News office saying something to the effect of "Do you read the Washington Post, Bill? 'Cause they love to split their infinitives at the Post - but I don't! Fix it!" Since I read the Washington Post, I have been meaning to look it up for ages to see what she was talking about and today I finally did and was so pleased with my grammatical realization that I thought I'd share:

Split infinitive = breaking up the basic part of a verb (basic meaning "to run, to breathe, to eat") with some other part of speech. All the grammar websites say that the 'most famous' of all split infinitives is "to boldly go where no man has gone before," with the adverb 'boldly' interrupting the basic verb phrase 'to go.'

There's an on-going debate among "grammarians" regarding whether or not this type of phrase is grammatically correct. I realize I am nerdy, but I was excited to learn this. So excited that I followed it up with a realization about another grammatical phrase I've been perpetually unsure of - the dangling participle.

This one I'm pretty sure I did learn about in the past, but just forgot. This could be because it's often interchangeable with a grammar favorite, the misplaced modifier (word arrangement makes the sentence confusing or incorrect - She opened the refrigerator and saw the salad dressing.) 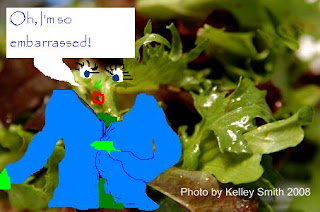 Learning these things, the task of writing seems so much clearer.
Posted by Emily Lilley at 8:25 AM